Last week, the American Society of Civil Engineers (ASCE) attended an invitation only event with U.S. Department of Transportation (US DOT) Secretary Elaine Chao announcing the Department’s release of nearly $1.5 billion in grants to fund the Infrastructure for Rebuilding America or “INFRA” program for freight, highway, and bridge improvements created by the Fixing America’s Surface Transportation (FAST) Act of 2015. Additionally, US DOT announced that through the Federal Aviation Administration’s (FAA) Airport Improvement Program (AIP), $677 million in AIP grants will be awarded to over 200 airports across the United States for airport infrastructure projects including runways, taxiways, aprons, and terminals.

Under the FAST Act, the Nationally Significant Freight and Highway Projects (NSFHP) program was established to provide financial assistance through competitive grants, known as FASTLANE grants, to significant freight and highway projects across the nation. In 2017, US DOT rebranded FASTLANE grants as INFRA grants, with grant program objectives still in effect.

Established under the Airport and Airway Improvement Act of 1982, AIP provides grants to public agencies – and in some cases, to private owners and entities – for the planning and development of public use airports that are included in the National Plan of integrated Airport Systems (NPIAS).

Both grant programs are key revenue tools that help improve our nation’s transportation infrastructure. ASCE has long supported both the INFRA and AIP grant programs and has urged Congress to fully fund each program at their authorized level.

ASCE’s 2017 Infrastructure Report Card, graded our nation’s bridges, roads, rail, and aviation infrastructure a “C+,” “D,” “B,” and “D,” respectfully. These grades reflect an under investment in key components of our nation’s infrastructure network and we continue to urge Congress and the Administration to act and find ways to rebuild and invest in our nation. 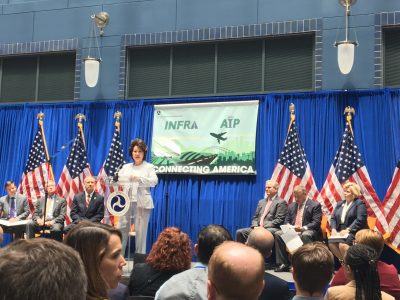