January 12, 2021 By: America's Infrastructure Report Card
Back to News

Think about what you can do with an extra $3,300 a year. Narrow that down to $275 each month—a typical car payment. Simplify that number a little more to $63 dollars a week – takeout for a family a four once a week (we’re all doing a lot of that these days). This amount of money–$3,300/year, $275/month, and $63/week— is how much inadequate infrastructure, like sitting in traffic, hitting a pothole, your power going out, or a water main break, is costing the average American household, according to a new economic study released today by ASCE.

The study, Failure to Act: Economic Impacts of Status Quo Investment Across Infrastructure Systems, finds that continued underinvestment in infrastructure and the inefficiencies that will result will have a cascading effect on the economy, increasing the burden on families, business productivity, and overall GDP year after year over the next 20 years. The study notes that infrastructure inadequacies will cause the loss of $10 trillion in GDP and lead to a decline of more than $23 trillion in business productivity cumulatively over the next two decades if the U.S. does not close the growing gap in the investments needed for bridges, roads, airports, power grid, water supplies, and more.

Jobs losses nationally will reach 3 million in 2039. That’s two times the number of Walmart employees in the U.S. Industries such as manufacturing and healthcare are particularly vulnerable to the drastic impacts of unreliable, inefficient infrastructure: nearly half (about 47%) of the projected jobs lost in 2039 will be in high-wage and high-production jobs like these.

To paint the picture of how this impacts manufacturing, the production of goods — such as cars, chemicals, foods and metals — requires energy, water, transportation systems, and ports for those goods being shipped, including to international markets. If the infrastructure investment gap is not closed, the report says U.S. exports will be reduced by $2.4 trillion and the country will lose $4 trillion in trade, which will lead to the national trade deficit to balloon by $626 billion by 2039.

The investment gap for surface transportation investment has grown since the previous study in 2016—from $1.1 trillion over 10 years to $1.2 trillion over 10 years. While increased investment from the federal and state levels have helped shrink the gap, or even just keep it steady in some areas (such as inland waterways, ports, and to a lesser extent, aviation), the areas that are most recognizable to all Americans—water, wastewater, roads, bridges, rail, and transit are where the nation is falling further behind.

While we are already paying the price, it is not to late to act now to mitigate the harm to our GDP, trade volumes, and declines in personal income, since more than three-quarters of the total economic impacts projected in our 20-year study occur during the second decade (2030-2039). Additional infrastructure investments will safeguard against:

So, how can we jumpstart the U.S. economy and break out of the pandemic recession? One way: infrastructure investment. America’s overdue infrastructure bill is costing every American household money they cannot afford to lose—especially now. 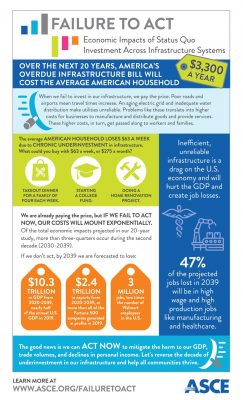