The American Society of Civil Engineers unveiled their 2021 Report Card for America’s Infrastructure on Wednesday, March 3. The nation earned a ‘C-’, up from 2017’s cumulative GPA of ‘D+’. This is the first time since ASCE began issuing the report card that the nation’s infrastructure has received a GPA outside of the D range.

The highest grade was the ‘B’ in the rail category, while the lowest was the ‘D-’  for the nation’s transit systems. The report finds that 45% of Americans lack reliable access to transit services. Eleven categories received grades in the ‘D’ range. The Report Card covers 17 categories of infrastructure pertinent to all Americans: , including a new stormwater chapter, and a spotlight on broadband. With the ongoing COVID-19 pandemic, the need for national broadband infrastructure has become more apparent than ever during the last year. 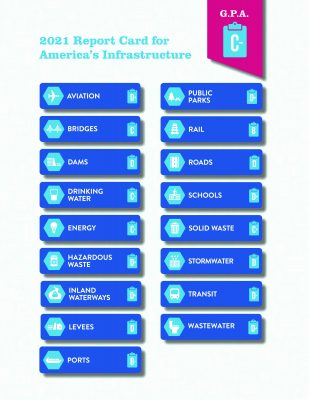 Between 2017 and 2021, five category grades increased while only one—bridges—decreased. This, combined with state and local governments’ commitment to improving infrastructure, indicate that infrastructure investment in the United State is trending upwards. However, 11 of the 17 categories received scores in the ‘D’ range: aviation, dams, hazardous waste, inland waterways, levees, public parks, roads, schools, stormwater, transit, and wastewater. This demonstrates that much more work is needed to be done to improve the overall infrastructure network.

Many sectors, especially those with lower grades, have staggering maintenance backlogs. Implementation of asset management can be helpful for these categories to ensure maintenance needs are taken care of when necessary. With such large backlogs, developing a clear understanding of where available funds are most needed is essential for protecting lives and maintaining a productive economy.

The country’s total infrastructure needs over the next 10 years total nearly $6 trillion, but after considering various sources of committed funding, the gap to meet those needs is $2.59 trillion. If this is not addressed, America’s overdue infrastructure bill will cost each American household approximately $3,300 per year, or $63 per week.

In order to close this gap, ASCE calls for strong federal, state, and local leadership and investment in infrastructure. Additionally, resilience must be a priority, as the ability to withstand or recover from extreme events is key to infrastructure survival.

After the unveiling of the report card, ASCE hosted the virtual Solutions Summit, which included spotlights on various infrastructure topics such as energy, dams, levees, transportation, water, inland waterways, and ports. Speakers included a keynote speech U.S. Secretary of Transportation Pete Buttigieg and panels including notable names such as Maryland Governor Larry Hogan, Senator Tom Carper (D-DE), and Representative Garret Graces (R-LA), among many others.

Prev Story: Licensure Bills Picking Up Steam in Statehouses Next Story: Now is the Time for Strong Infrastructure Investment