The American Transportation Research Institute (ATRI) released an assessment of the nation’s transportation funding options, an update to its original research in 2007, to identify the best revenue sources for our transportation network.

In addition to ATRI, other industry stakeholders have offered alternative revenue sourcing options. The American Association of State Highway and Transportation Officials (AASHTO) had offered their own matrix of revenue source options in a 2014 report. These include, but not limited to, a container tax, driver’s license surcharge, freight charge, and registration fee in addition to the federal motor fuels tax.

After assessing several funding options based on administrative, efficiency, equity, and effectiveness; ATRI found the federal motor fuels tax to be the best option. It’s low administrative costs and proven effectiveness make it the most direct funding option to address the long-term solvency of the Highway Trust Fund (HTF) – the federal fund that pays for bridges, roads, and transit.  Mileage-based user fees and increased tolling scored lower in the assessment process because it falls short of the needed revenue to complete a comprehensive infrastructure package that would not induce system-user hardship.

In addition to increasing the federal motor fuels tax, the report also offered additional recommendations to ensure the HTF’s solvency including “Investigate an Automatic Mechanism for Filling in HTF Gaps with General Fund Dollars.” The report acknowledges that this not an ideal scenario, but given the economic importance of the HTF, doing so would provide greater certainty. Considering technological advancement, another recommendation is “Identify Methods for Collecting Revenue from Electric Vehicles.” 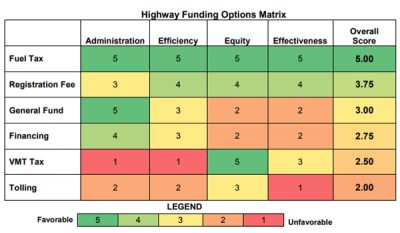 *Taken from ATRI’s “A Framework for Infrastructure Funding”

ATRI’s research again underscores the need to fix the HTF, and objectively found increasing the federal motor fuels tax is the best way to do it. Unfortunately, Congress did not choose to #FixTheTrustFund in either the House or the Senate tax proposals.