The High Cost of Underinvesting in Infrastructure: $9 a day 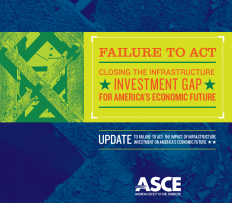 Today’s release of the American Society of Civil Engineers’ Failure to Act: Closing the Investment Gap for America’s Economic Future reveals that inadequate infrastructure is costing every American family $3,400 a year in disposable income.

The economic study, an update to the initial series ASCE released prior to the 2013 Report Card, identifies the 10-year needs across 10 categories of infrastructure is $3.3 trillion, including a $1.4 trillion investment gap.

Our overdue infrastructure bill is costing us time and money. The report identifies the following economic ramifications:

These findings underscore the findings of the initial Failure to Act series, showing the economic benefits of infrastructure investment reverberate through every sector of the economy, while the economic losses that come from deferred investment also become worse over time. Furthermore, the longer we delay the more likely we are to need to replace the infrastructure rather than repair it.

By increasing the investment by $144 billion a year for the next 10 years at the federal, state and local levels, we can upgrade our infrastructure, and protect our GDP, jobs, families’ disposable income and our nation’s competitiveness.