Take Some Time Today to Imagine a Day Without Water

Most of you have probably already had a cup or two of coffee today or started the laundry. Now imagine starting your day without that morning brew, brushing your teeth, or washing your toddler’s hands before breakfast. Imagine what it’s like to not have water, even for one day, and you can see life grinds to a halt.

For decades, Americans have been privileged to have access to clean water at a moment’s notice. Pouring a glass of water, washing hands, brushing teeth – all activities that require water. With largely outdated infrastructure supporting our clean water access, those days may not be so assured for all Americans.

Today, October 23 is the fifth annual Imagine A Day Without Water—a day of national education and awareness. On this day, the American Society of Civil Engineers (ASCE) is asking Americans to contemplate what just one single day would look like without available clean water and modern wastewater treatment.

Water infrastructure is out of sight, out of mind, but in reality, the United States uses 42 billion gallons of water per day to support our daily life. U.S. drinking water relies on a system of one million miles of pipes across the country, most of which were laid in the early-to-mid 20th century, built with an expected life span of 75 to 100 years. In fact, Americans across the country know the importance of clean and dependable drinking 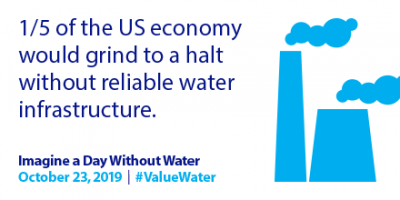 We’re seeing the results of aging infrastructure now. Of the 42 billion gallons we consume daily, nearly six billion is lost due to leaking or severed pipes. The U.S. is averaging water main breaks nearly once every two minutes across the country, or 240,000 per year. After all, U.S. drinking water only received a dismal “D” on ASCE’s 2017 Infrastructure Report Card and our wastewater systems earned a “D+.” If we do not have clean water, our health, safety, economy, and environment will all be at risk.

U.S. drinking water is still almost universally high, but we are seeing some unsettling and unacceptable exceptions. Flint, Michigan saw dangerous levels of lead infiltrating the supply just a few years ago.  Flint residents are still forced to use bottled water while officials work on a solution. In Newark, New Jersey, residents have been dealing with elevated lead levels since 2017. The levels reached a tipping point this past August when around 15,000 households were forced to rely on bottled water for daily use.

The Environmental Protection Agency recently issued a proposed lead and copper rule update, aimed at improving the process for how communities test for lead, which the agency’s been working to revamp since 2005. This rule would create a “trigger level” of 10 parts per billion (ppb) to require utilities to review the chemicals they use to prevent lead pipes from corroding. The current lead action level is 15 ppb. While many implementation questions remain, this legislation is a huge step forward in modernizing our water infrastructure because no one should have lead in their drinking water.

Significant funding is needed to prevent future water crisis and ensure that all communities have access to adequate drinking water and wastewater treatment. Outdated infrastructure, including leaky water pipes, costs the average American family $9 dollars a day. As ASCE advocates for robust legislation that addresses our nation’s infrastructure needs, we ask Congress to fully fund critical water resources infrastructure programs such as the Clean Water and Drinking Water State Revolving Funds and the Water Infrastructure Finance and Innovation Act.

ASCE is a proud advocate of infrastructure investment and participant in Imagine a Day Without Water. Join the Value of Water and ASCE on social media in the ongoing conversation about investing in our drinking water and wastewater infrastructure networks.

As you go about your day, be sure to Imagine A Day Without Water: what would a lack of water mean to you?