The role and importance of infrastructure are top of mind for Puerto Ricans who saw first-hand how failures impacted our public health and safety after Hurricanes Maria and Irma in 2017. This Report Card finds that Puerto Rico needs to increase investment by $1.3 billion to $2.3 billion annually – or $13 to $23 billion over 10 years – to update infrastructure in order to support economic growth and competitiveness. However, when considering deferred maintenance and hurricane-related recovery projects, the investment gap is even larger.

Looking forward, our infrastructure throughout Puerto Rico must be rebuilt more resiliently by incorporating the latest materials, regularly collecting and aggregating data, and most importantly, building according to adequate codes and standards. Funding must come from all levels of government and the private sector.

The 2019 ASCE Report Card for Puerto Rico’s Infrastructure is a simple tool to help residents, businesses, and policymakers understand the state of the island’s infrastructure and consider solutions to raise the grades. This information is intended to move the conversation forward about how to rebuild Puerto Rico and improve our economy and quality of life. 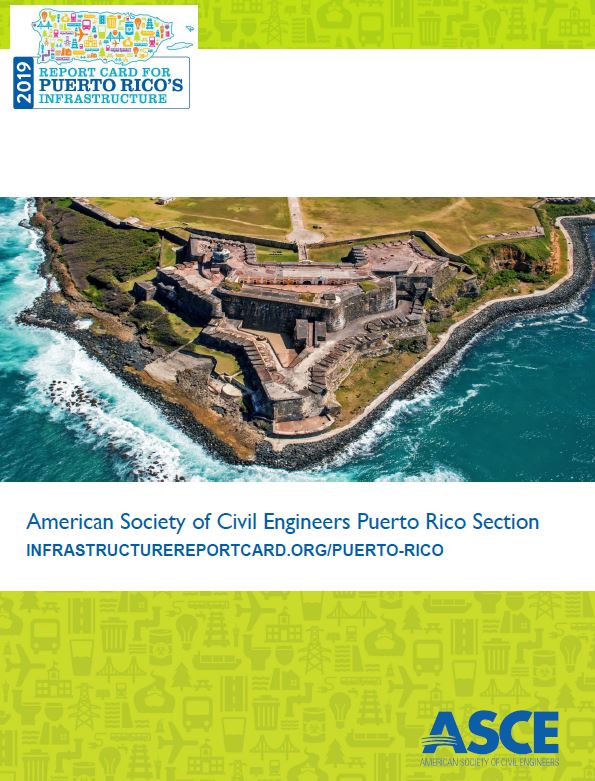 According to the Federal Highway Administration, there are 2,325 bridges in Puerto Rico. Of those bridges, 11.7 percent are in poor condition, and approximately 69 percent are in fair condition. Only 19 percent of Puerto Rico’s bridges are in good condition. Additionally, Puerto Rico is home to four of the nation’s top 250 most travelled structurally deficient bridges, with two in the top 10. Hurricanes Irma and Maria further exacerbated the precarious fiscal situation of Puerto Rico’s highway agency. The Puerto Rico Highways & Transportation Authority and other bridge owners were forced to reassign regular maintenance funding to asset recovery due to widespread damage. Furthermore, planned capital improvement projects were put on hold to allow agencies to prioritize emergency repairs to bring damaged infrastructure back online. Looking forward, a robust maintenance program must be established and funded that prioritizes improving resilience and rehabilitating aging bridges.

Puerto Rico’s 37 dams maintain water levels in reservoirs and streams for a variety of purposes, including recreation, flood control, potable water storage, and hydropower. Ninety-seven percent of Puerto Rico’s dams are high-hazard potential, meaning failure would likely result in a loss of life. Island-wide, all the high-hazard potential dams have emergency action plans (EAP) in place, although only 35 percent were exercised – i.e. tested – in the past five years. While 81 percent of dams in Puerto Rico are reported to be in satisfactory condition, the state dam safety office lacks the funding to do comprehensive seismic and hydraulic studies and other analysis that is needed to more thoroughly determine the current conditions, risks, and necessary retrofits of the dams. Additionally, dams owners require funding to perform retrofits deemed necessary if discovered during those inspections. Meanwhile, sedimentation poses a long-term threat and impacts the ability of dams to store enough water to serve residents during dry seasons. Several of the most important water supply reservoirs have lost between 30 percent and 60 percent of their capacity due to sedimentation. With a large number of dams aged 50 years or more and predicted increases in flooding, additional funding is required to mitigate the risk of dam failure, especially for dams within the North Coast water supply network.

Public water systems serve approximately 96 percent of Puerto Rico’s 3.3 million residents, with the remainder served by rural and remote small community-operated systems. Puerto Rico Aqueduct and Sewer Authority (PRASA) owns and operates much of the complex infrastructure network and faces significant challenges. Approximately 59 percent of treated water ends up as non-revenue water loss, meaning the utility is providing it to customers at no charge through various mechanisms such as inaccurate meters, unauthorized water consumption, or water main leaks. It should be noted PRASA has improved its non-revenue water loss rate, which stood at 62 percent five years ago. While water quality continues to improve as new processes are implemented in response to stricter regulations and public expectations, hurricanes have aggravated an already difficult fiscal and operational situation for both PRASA and non-PRASA systems. PRASA will undertake a $2 billion capital improvement program over the next five years, with one-third of funding allocated to repair damage and a significant amount set aside for resiliency.

Leading up to Hurricanes Irma and Maria in 2017, Puerto Rico’s energy infrastructure was in poor condition. The island also lacked source diversity; approximately 98 percent of electricity was generated by fossil fuels. Still, average electricity prices exceeded $0.19/kWh, roughly double U.S. rates. After Hurricane Maria devastated the energy grid and contributed to the second-longest blackout in recorded history, authorities focused their efforts on the short-term goal of restoring power as quickly as possible. However, the long-term need for developing a resilient and sustainable energy grid was overlooked. Today’s network is fragile, blackouts are frequent, and prices have continued to increase. Even modest wind events have the potential to render the current energy grid inoperable and Puerto Rico Electric Power Authority lacks access to the capital needed to improve grid condition, capacity, and resiliency, making federal support imperative.

ASCE supports recent findings from the U.S. GAO that any grid investment needs to be accompanied by policy, guidance, and regulations that yield grid resilience consistent with consensus industry standards. To facilitate smart building, ASCE has published a series of codes and standards for grid design and construction to better enable Puerto Rico’s energy infrastructure to withstand future storms and other stresses. It is imperative that lifecycle cost methods, redundant power supplies and communications channels, and quality controls be included in decision-making and implementation to lessen the impacts of future storms. Proven renewable energy and advanced “smart grid” technologies must also be included.

Puerto Rico—an island in the Caribbean—is highly dependent on maritime transportation to import most of its supplies. This makes ports infrastructure critical. Ninety-eight percent of the island’s electricity comes from imported petroleum, natural gas, and coal. Approximately 80 percent of the island’s food is currently imported. Ports also play an important role in the tourism industry; FY2018 closed with a total of approximately 1.2 million cruise ship visitors and an approximate contribution of $152 million to the economy. The importance of ports was especially noticeable after Hurricane Maria hit the island in September 2017, since they played a critical role in the delivery of first aid supplies. Puerto Rico’s already fragile ports infrastructure suffered severe damage as a result of the hurricane. The estimated cost to repair all ports throughout the island is over $750 million. However, the capital improvement program for FY2020-2024 provides just over $2 million in investments.

Puerto Rico has struggled in recent years to adequately maintain its roadway network, in part because of a reduction in personnel and partially due to a lack of dedicated funding for road preservation and maintenance. The lack of a data-driven asset management plan also hurts long-term road management policies and projects. Additionally, the island allows much heavier trucks on its roadways than much of the mainland U.S, which leads to quicker degradation of pavement and bridges. Making matters worse, often Puerto Rico’s local municipal roads are built without the necessary supervision or quality control standards, which lead to early pavement failure. Pavement maintenance and resurfacing activities on local municipal roads could be substantially improved by promoting quality control standards and providing appropriate project supervision and management. Puerto Rico is currently restructuring its debt through Title III protections under PROMESA, which has allowed the Puerto Rico Highway and Transportation Authority (PRHTA) to direct its resources to improvement projects on state roads. However, in order to maintain its assets in a state of good repair and continue normal operations, PRHTA estimates that it will need $3.1 billion of capital expenditures from FY18 to FY23. Additionally, funding from the federal government and a more strategic approach to maintenance is necessary in the near-term.

Puerto Rico’s solid waste infrastructure is under significant strain. Post-closure activities at the 30 landfills that were closed in the 1990s are not taking place. Meanwhile, of the 29 solid waste facilities currently in operation, only 11 are compliant with federal standards. Insufficient operation practices, management, and inspection of both open and closed municipal solid waste facilities often leads to improper waste compaction and ineffective leachate and stormwater management. Consequently, this contributes to the presence of vectors at landfills, such as mosquitos, rats, and seasonal pests, which can potentially aid the spread of zika, chikungunya, and other diseases. Capacity at existing landfills is also an urgent concern, especially after Hurricanes Irma and Maria produced approximately 2.5 million tons of debris, or 2.5 to 3 years’ worth of solid waste that was then disposed of at landfills. The U.S. Environmental Protection Agency found in 2018 that there is less than five years of remaining capacity at active landfills across the island. Meanwhile, Puerto Rico residents on average dispose of 5.56 pounds of solid waste per person, each day, compared with the 4.4 pounds per person a day in the mainland U.S. Recycling rates on the island are low, with approximately 9 to 14 percent of solid waste diverted.

Puerto Rico’s residents and businesses largely depend on the Puerto Rico Aqueduct and Sewer Authority (PRASA) to provide wastewater collection services. PRASA owns and operates 51 wastewater treatment plants, 5,300 miles of sewer lines, and 824 wastewater pumping stations. While PRASA has implemented new processes in response to two Consent Decree Agreements with the Environmental Protection Agency, the agency still faces significant fiscal and operational challenges, especially in the aftermath of Hurricanes Irma and Maria. The island population has declined by 14 percent since 2010, leaving fewer rate payers to fund necessary projects. The declining rate payer base, combined with a lack of access to financing, perpetuates challenges associated with funding PRASA’s capital investment program. A total of $551 million is needed for renewal and replacement over the next six years to update aging PRASA infrastructure. A recent restructuring of approximately $1 billion debt is expected to provide payment savings of $440 million over five years; that funding will be provided to the stalled capital improvements program.

The national transportation research group TRIP released a new report on February 26, 2019, stating that deteriorated roads and bridges, congestion, and lack of desirable...

On Thursday, December 6, the National Academies of Sciences, Engineering, and Medicine, Committee for a Study of the Future Interstate Highway System, and the Transportation...

On May 31, individuals and organizations across the country recognized National Dam Safety Awareness Day. This event is held each year in memory of...