Infrastructure isn’t glamorous, but it makes a difference when it does not work. Affordable, reliable, and quality infrastructure is critical to our economic and social well-being. Kansas is the heart of farm country and the economic survival of our rural communities depends on reliable infrastructure. If commodities cannot be delivered to our cities, we as civil engineers have failed one of our fundamental principles for the welfare of the public. Unfortunately, there has been a recent trend to shift dollars reserved for infrastructure to other allocations. The time is now to prioritize our needs.

As civil engineers, our job is to plan, design, construct, and maintain our infrastructure networks and this document allows us the opportunity to share that information with the public. The Report Card provides a snapshot for residents and policymakers to engage in conversation about where we are and where we want to be. We hope that this information provides the insight needed to start that conversation and ignite action.

To read about how each category of infrastructure scored, keep scrolling or read the Report Card for Kansas’ Infrastructure Executive Summary. 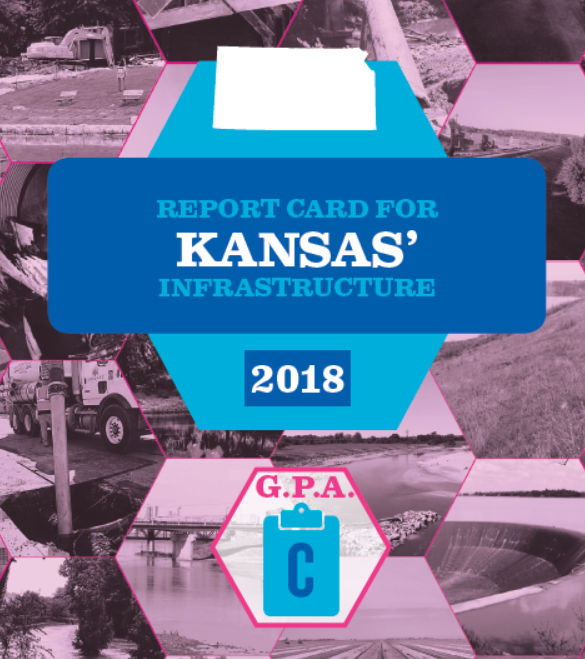 Aviation activity at Kansas airports supports almost 34,000 total jobs, generates over $1.8 billion in payroll, and produces more than $9 billion in annual economic output. With a wide variety of airport types, it is important that the state is involved in maintaining and supporting both regulatory and financial requirements. As the Kansas aviation system prepares for anticipated growths in passenger and freight traffic, the Kansas Department of Transportation has provided an additional $2 to $2.5 million per year to airports, through the T-WORKS statewide transportation program. While the additional funding is helpful, it is insufficient; between 2015 and 2017, development costs grew 11%, from $454 to $505 million. Meanwhile, Kansas continues to suffer from ongoing budget challenges, which have impacted both state funding and local match participation in priority projects. Without adequate agency and airport funding, Kansas citizens’ health and safety will be at greater risks due to inadequate access to a properly operated and maintained airport system. Looking forward, state legislators should be focused on finding adequate funding solutions to leverage existing federal and local revenue sources.

The Kansas Department of Transportation (KDOT), the Kansas Turnpike Authority, and localities have prioritized maintaining, repairing, and replacing the 25,001 bridges in the state. Today, Kansas ranks first in the nation for the highest percentage of “good” condition National Highway System (NHS) bridges and has the third-fewest in “poor” condition. The inventory of structurally deficient bridges in Kansas has been cut nearly in half over the past two decades; by 2017, 8.4% of bridges in the state were structurally deficient, compared with 8.9% nationally. The 10-year KDOT T-WORKS program, which as of 2015 had repaired or replaced nearly 600 bridges, has been especially successful at improving the overall condition of the state’s bridges. However, locally-owned bridges require attention and almost 1,500 non-NHS bridges are in “poor” condition. In addition, over the last five years, the legislature has diverted $2.4 billion from T-WORKS to balance the budget.

Kansas’ estimated 6,400 dams meet a variety of needs, including agricultural, recreational, stormwater management, water supply, and commercial. Most dams in the state are relatively small, of earth construction, and privately owned. 457 Kansas dams are classified as High Hazard Potential (HHP) or Significant Hazard Potential (SHP), meaning failure of the structure could result in significant loss of life or property. HHP dams are required to have an Emergency Action Plan (EAP) to maximize the safety of downstream residents in the event of a dam failure or dam emergency. 86% of HHP dams in Kansas have an EAP; this is above the national average of 77% and a big improvement over the 62% of Kansas HHP dams that had an EAP in 2013. Additionally, the percentage of inspections of HHP dams has improved dramatically since 2010. However, increased funding and staffing are recommended to bring Kansas more in line with national averages. 28 dams that are rated high or significant hazard potential have no state oversight of their current condition. A minor change to a 2013 law could correct this situation.

While drinking water treatment in Kansas has met most federal and state standards, evolving regulations often challenge utilities and municipalities to meet new water quality standards. Smaller communities, which can’t spread treatment costs over many customers, are at the highest risk for noncompliance. As aquifer levels decrease in Kansas, drinking water capacity will also become a larger issue. Regional solutions and interconnections between water supply systems will help ensure the longevity of the water supply in Kansas. The Environmental Protection Agency estimates that $4.2 billion in drinking water improvements are needed in Kansas over the next 20 years. In 2017, the Drinking Water State Revolving Loan Fund provided Kansas communities close to $14 million of assistance for 20 projects. Robust planning efforts and increased funding are necessary for Kansas to maintain its water supply and ensure safe drinking water is delivered to customers through reliable drinking water distribution systems.

Kansas is a state with abundant fuel types, relying on coal, nuclear, gas, and wind generation to power the state. Recent developments in renewable energy have seen wind energy production increase to 39% of overall energy production in Kansas, from only 1% several years ago. Aging infrastructure and government regulation continue to be major drivers for large expenditures at both power plants and in the transmission and distribution systems. Energy prices in Kansas are currently very affordable ranking just below the national average, and the state also exports roughly 40% of its energy to other states. Looking ahead, Kansas’ diverse inventory of energy infrastructure will need to expand and upgrade, due to new demand, current age, and environmental standards. Wind energy is growing but could stall due to expiring incentives.

The National Levee Database (NLD), a compilation of levees participating in U.S. Army Corps of Engineers programs, lists Kansas as having a total of 225 levees with a total length of 1,412 miles. More than half of these levees are shared with the State of Missouri. The total number of levee inspections in Kansas has increased significantly since 2013, and levees that have been inspected are in fair to good condition. Along the Missouri River and its tributaries, the Kansas Hazard Mitigation Team has improved coordination of flood hazard identification and mitigation efforts with the State of Missouri and the USACE. However, one in four levees across the state have not been inspected and could be deficient, according to the NLD. Funding of the National Levee Safety Initiative (NLSI) could help close the gap on levee inspections.

Railroads in Kansas consist of 4,700 miles of track and move 340 million tons of freight through the state. While the 2,800 miles of track owned by the major rail companies are typically well maintained, the short line tracks that carry lower traffic volumes have not had adequate funding in place to provide the necessary maintenance and upgrades. Rail traffic is forecasted to increase and will cause increased delays in moving both goods and passengers. It is estimated that the railroad industry provides $5 billion in economic benefit to Kansas. While funding for the large, Class I railroad’s infrastructure is generally adequate, funding for short line improvements and passenger rail improvements is less certain. To maintain this benefit and help improve the state’s rail infrastructure, adequate funding must be found to increase rail capacity and help to align the state with the National Rail Plan.

Historically, Kansas has been home to a highway system in great condition. Today, the Kansas Department of Transportation (KDOT) is prioritizing preservation projects as part of the Transportation Works for Kansas (T-WORKS) Highway Program. However, many much-needed modernization and expansion projects across the state have been delayed, and preservation dollars have slowed, as funding from the T-WORKS program has been diverted to shore up the State of Kansas budget. Lawmakers should continue to work towards fulfilling T-WORKS funding promises, which will save money in the long run; every $1 of deferred maintenance on roads and bridges has been found to cost an additional $4 to $5 in needed future repairs. When it comes to safety on our roads, the state continues to see an increase in seat belt use. However, a recent increase in fatal crashes is of concern and the increase in distracted driving will require even more emphasis on education and enforcement in the coming years.

Interest in stormwater infrastructures has greatly increased over the last 10 years, primarily due to growing regulation and oversight by the Environmental Protection Agency (EPA). Despite new awareness, there is no central source of information to use when assessing the effectiveness or even presence of stormwater management programs. Instead, we rely on indicators of stormwater programs, such as participation in voluntary FEMA incentive programs, applications for environmental programs, and in some cases, the presence of a stormwater utility. To complement the fragmented data on the existence and condition of stormwater infrastructure programs, ASCE also developed and distributed a survey to stormwater communities, the results of which indicated stormwater infrastructure across the state was fair to poor. Approximately 58% of cities surveyed have a stormwater utility funding source that averages $5.88 per Equivalent Residential Unit (ERU) per month. It is encouraging that cities are taking advantage of dedicated funding sources, but the levels of funding are not sufficient to sustain a reasonable level of life cycle maintenance. Cities reported that their maintenance and infrastructure replacement programs are primarily reactive since available funding resources are minimal.

12% of roads are in poor condition. Each motorist pays $509 per year in costs due to driving on roads in need of repair