Infrastructure impacts you whether you see it or not. We all use our roads, bridges, drinking water pipes, and waste systems every day.

Infrastructure is meant to facilitate smooth daily activities, but when it is unreliable, the public’s daily routines are disrupted. If you live in D.C., you’ve probably noticed the impacts of unreliable infrastructure: When commutes are brutal; neighborhoods flood, or the power is out—those occurrences draw our attention to infrastructure’s impact on our lives.

Recommendations exist to raise every grade for D.C.’s infrastructure. Infrastructure problems are not impossible to solve and some solutions are already on the way. Major wastewater projects across D.C. are in progress to reduce flooding and clean up the Anacostia, critical bridges have been fixed and others have repairs in the works, levees have made modest improvements, and some of the rail system has seen network expansions

This Report Card provides facts and grades on some of D.C’s critical infrastructure. The Report Card shows how it all stacks up – from roads to water to levees. 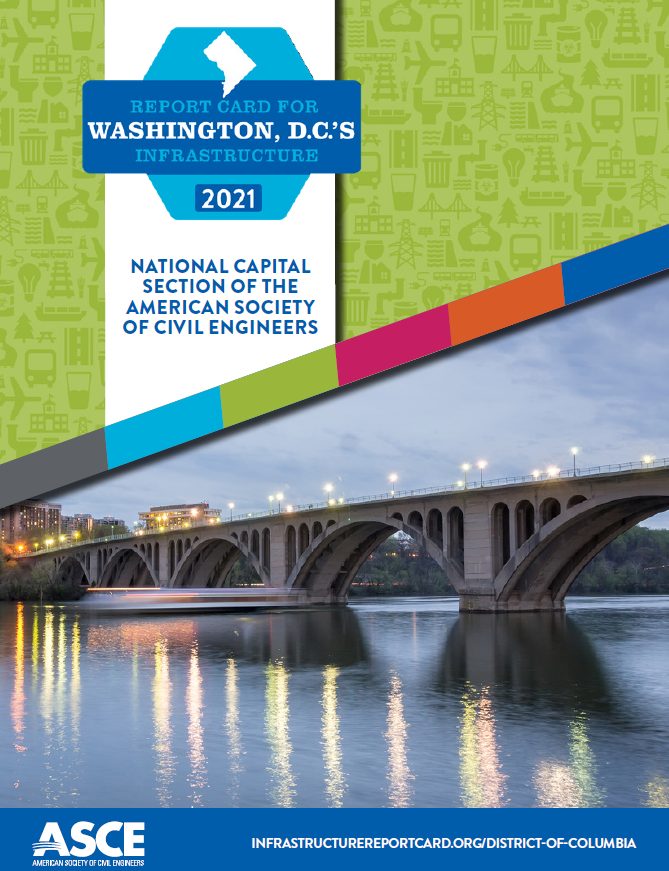 D.C. has 244 highway bridges, 208 of which are owned by the D.C. Department of Transportation (DDOT) and 36 of which are owned by the National Park Service (NPS). The average age of bridges in D.C. is 62 years and approximately 30% of them will need to be rehabilitated in the next 10 years. Though DDOT and NPS have made significant strides in replacing or rehabilitating old bridges, about three percent of bridge conditions are still classified as poor, a value significantly lower than the national average of 7.5%. Even after the rehabilitation of the Arlington Memorial Bridge, more than 200,000 trips will be taken, every day, over bridges in poor condition.

D.C.’s drinking water comes from the Potomac River, is conveyed by the U.S. Army Corps of Engineers (USACE)-owned Washington Aqueduct, and is purchased and delivered to users by the D.C. Water and Sewer Authority (DC Water). The system supplies approximately 94 million gallons per day through a distribution network that contains 1,350 miles of pipes. The District’s drinking water infrastructure also includes four pumping stations, five reservoirs, three elevated water storage tanks, and 9,300 fire hydrants. Current projections show capacity is sufficient to meet demands through 2030. However, the network of drinking water pipes has a median age of 77 years and leaks at more than twice the rate of the industry’s average. Consistent with nationwide trends, ratepayers’ bills have risen from an average monthly combined drinking water, wastewater, and stormwater bill of approximately $108 in 2019 to about $115 in 2020. To combat the rising costs, a Customer Assistance Program for low-income families has been provided to help offset the financial burden. Additionally, DC Water was an exemplary safety record. The agency has not experienced any Safe Drinking Water Act permit violations since 2006, was the first utility in the nation to systematically map its lead service lines, and has an $18.5 million program to replace those lead service pipes.

D.C. has some of the most advanced renewable and resilient energy infrastructure policies in the country but continues to have a robust reliance on imported electricity and natural gas. D.C. imports upwards of 90 percent of its electricity, while most of what is generated in the District is from rooftop solar resources implemented through successful investment incentives. To ensure energy resources meet the public’s needs without compromising safety, the D.C. energy sector is transitioning overhead distribution lines underground and routinely repairing natural gas pipelines. Furthermore, D.C. is leveraging utility partnerships to explore energy solutions in a holistic manner. The District has passed ambitious legislation,  published plans, and funded a regulator-led working group to conduct in-depth research on technologies including microgrids. Overall, D.C. is meeting its current demands, improving resilience and trying to move towards a more renewable energy portfolio, while also sufficiently prioritizing the social and economic needs of its citizens.

The National Levee Database shows that the District of Columbia has two levee systems: The District of Columbia Levee System (DCLS) and the District of Columbia Anacostia Levee (DCAN), totaling 3.41 miles in length. The DCLS was last rated as “Minimally Acceptable” during a 2016 routine inspection by U.S. Army Corps of Engineers (USACE) and became accredited by the Federal Emergency Management Agency (FEMA) to withstand a 100-year riverine flood. The DCAN continues to be rated as “Unacceptable,” per a 2012 periodic USACE inspection. To address concerns and resilience, some construction efforts providing additional protection are now complete while discussions are ongoing around raising the DCLS levee crest to provide additional freeboard. D.C. depends heavily on both the structural integrity of the levees, and the emergency response planning to prevent flooding within the Nation’s Capital.

Within the District of Columba, rail includes 75 track miles, four rail yards, and two passenger stations. Freight rail is owned and operated by CSX, a Class I railroad that operates throughout the Midwest and east coast. Passenger rail service is provided by Amtrak, the Virginia Railway Express (VRE), and the Maryland Area Regional Commuter (MARC). Thanks to major investments, including the completion of two double-stack-capable tracks through the Virginia Avenue Tunnel, the condition of rail infrastructure in the District is improving. However, challenges remain. Passenger rail capacity in D.C. is constrained by the current two-track bridge owned by CSX and Washington Union Station facilities, even as plans are being made to more than double the number of freight and passenger trains crossing the Potomac by 2040. Passenger rail continues to be underfunded, despite providing a host of economic, public health, and environmental benefits to the region.

The District of Columbia is home to more than 1,150 miles of roads, of which less than 10% are rated as “poor” according to the Pavement Condition Index, a noteworthy improvement from five years ago. With a 43-minute average commute (pre COVID-19), the third highest in the country, D.C. workers spent 60% more time commuting than the
national average of 27-minutes. This translates to an annual cost of $2,015 spent sitting in traffic. The COVID-19 pandemic significantly reduced commuter traffic with 55% employees working full-time remotely—though with projected population and job growth, levels of congestion are projected to return. D.C. recently raised its gas tax by 10 cents, a step towards generating local funds for preservation and maintenance of the surface transportation network. However, despite a District-wide initiative to reduce pedestrian deaths to zero, known as Vision Zero, pedestrian deaths are on the rise, further indicating that D.C. must find ways to increase its investment in roads for congestion relief, and to improve the safety of drivers and pedestrians alike.

The Washington Metropolitan Area Transit Authority (WMATA or Metro) and the District Department of Transportation (DDOT) provide public transit services in the D.C. metro region over a network comprised of heavy rail transit and bus components supported by circulator bus, paratransit and streetcar elements. WMATA has been challenged by an aging infrastructure with increasing State-of-Good-Repair (SOGR) and safety-related needs during a period of steadily declining ridership. Infrastructure and vehicle investments have been significant in recent years. However, additional funding and new sources of revenue are needed to address the $1.8 billion required to comply with safety and security directives and for upgrades or replacements, all while a $6.6 billion SOGR backlog persists. In  addition, WMATA needs a robust plan to infuse innovation into its system and develop new approaches focused on diversifying operations and increasing ridership.

DC Water’s Blue Plains wastewater treatment plant serves more than 2 million people in the District and surrounding areas. The average age of sewer mains has increased from 84 years in 2016 to over 90 years in 2020, moving closer to their expected service life of 110 to 120 years. The recent Clean Rivers Project has, since 2018, dramatically reduced the discharge of untreated wastewater to local waterbodies during heavy and sustained rain events, with a projected 96% reduction in the discharge volume per year. However, DC Water is not currently achieving its annual goal of a 1% replacement rate of the aging wastewater collection system. To achieve the improvements that are needed, DC Water has now determined that a replacement rate of 2.3% is required. Blue Plains is world-renowned for its use of innovative technologies to eliminate pollutants while reducing electric consumption by a third.

22 miles of rail across the state

93% of roads are in poor condition. Each motorist pays $1,100 per year in costs due to driving on roads in need of repair