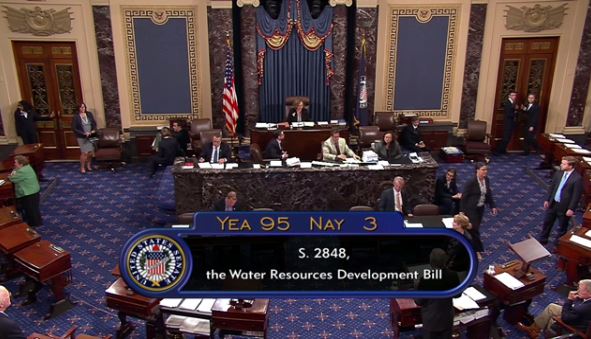 In a major victory for ASCE and other infrastructure stakeholders (i.e. everyone!) the Senate on Thursday passed S.2848 the Water Resources Development Act of 2016 in a vote of 95-3. In many ways, passing the bill should be a no-brainer, as WRDA will increase America’s competitiveness by preparing ports and harbors for post-Panama Canal renovation sized ships, establish a long-awaited dam rehabilitation program and authorize major ecosystem restoration projects across dozens of states. However, in an era of tightening federal budgets, partisan deadlock and election-year rhetoric many are calling WRDA’s passage no small miracle. It’s difficult to find any bill pass with such favorability, let alone a multibillion dollar one.

WRDA is now the legislative envy of other bill in town—bringing together two of the Senate’s arguably most polar opposite personalities—Jim Inhofe (R-OK) and Barbara Boxer (D-CA), who’ve made the case on just how important flood control, navigation and ecosystem restoration are to communities around the county. It also helps that the Congressional Budget Office predicts that while the bill “costs” nearly $10 billion, it will actually save the U.S. taxpayer $6 million dollars over ten years. Presumably, that has something to do with risk mitigation and maintenance activities the bill provides, allowing engineers to get ahead of problems before unscheduled delays or infrastructure failures stack up.

In April the House passed a much narrower bill, mostly focused on Army Corps Chief’s Reports and feasibility studies. The House Transportation & Infrastructure Committee held an updated hearing on their bill Thursday and are expected to begin full consideration of the bill next week and pass a bill before returning home in October. The hope is while Congress is home for election campaigning, the difference of the bills can be reconciled and prepared for quick passage in December.