Potholes: On the Street and in the News

Despite ringing in the New Year with a bomb cyclone, this January has been unusually warm across the country. We don’t need to turn to our Weather App to know that spring will be here before we know it. Instead, we can turn to the roads, where potholes are making their yearly pre-spring appearance thanks to alternating freeze-thaw temperatures.

Potholes made headlines this week as these infrastructure failures stopped traffic in Washington, D.C. Holes bigger than bathtubs required emergency repairs, closing part of the Clara Barton Parkway earlier this week, just in time for those commuting from Maryland to D.C. The National Park Service stepped in to patch these man-sized potholes after commuters reported dangerously large holes that caused them to swerve around the damage or pop tires driving over it. For perspective, take a look at just how large these potholes really are! 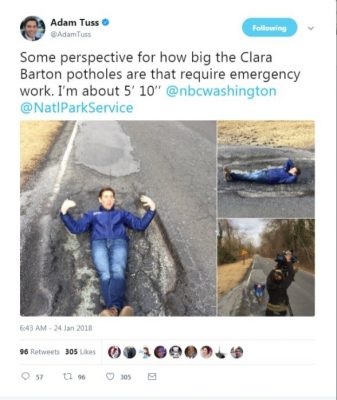 Also this week, Pittsburgh, Pennsylvania is in the midst of “Pothole Blitz.” With over 300 potholes reported in the city, the Pittsburgh Public Works crews are working to fill as many potholes as possible within the span of a few days.

To find out how your state’s roads stack up, take a look at our State by State map.

Prev Story: Public-Private Partnerships, A Tool in the Toolbox Next Story: Engineers Encouraged by President’s Focus on Infrastructure During State of Union Address