Pennsylvania Civil Engineers Give the State’s Infrastructure a “C-” Grade

A group of volunteer Civil Engineers from across Pennsylvania spent more than a year producing the report, to inform the public and lawmakers about the state of infrastructure in the commonwealth, and why funding investments in infrastructure is crucial for the safety and financial future of everyone in Pennsylvania. 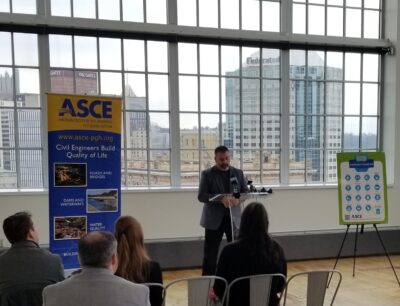 Release events were held in Pittsburgh, Harrisburg, and Bethlehem, with local engineers talking about the specific infrastructure needs in their parts of the state. In Pittsburgh, the report was released at the Energy Innovation Center. The Harrisburg event was held at the Keystone building near the state capitol. The Lehigh Valley event was at the Fritz Engineering Laboratory at Lehigh University, which is a civil engineering landmark structure that has been operating since 1909.

At each release event, the engineers who wrote the report card highlighted the benefits the Bipartisan Infrastructure Law is bringing to Pennsylvania in the year since it was signed into law. However, the funding from the infrastructure law is just a down payment on what is needed to pay for overdue repairs and improvements that will benefit communities for generations.

There are three key takeaways from the report card. They include Pennsylvania’s robust freight network, including airports, freight rail, ports, and roads supporting the supply chain in the northeast and across the country. While there have been significant investments in some parts of this network, others are falling behind even with the boost from the Bipartisan Infrastructure Law. Engineers also found the state’s aging water infrastructure threatens public health and are a drain on taxpayer dollars, literally and figuratively. Upgrades and financial investments are needed to stop the risk of emerging contaminants and a series of water leaks in systems across the Keystone state. Finally, increasing severe weather and consumer needs are straining every part of Pennsylvania’s infrastructure. Roads remain clogged, and mass transit and bike alternatives are underfunded to be a feasible option for many. All sectors of the built environment are in need of modernization to prepare for a future with more volatile temperature shifts and Pennsylvanians demanding low-carbon transportation.

The next step for Pennsylvania’s civil engineers is advocacy and education. With Pennsylvania electing a new governor and legislature, they are now preparing to meet with leaders from across the state to demonstrate the importance of funding infrastructure investments at all levels of government.

You can find more information and the full report at http://infrastructurereportcard.org/pennsylvania