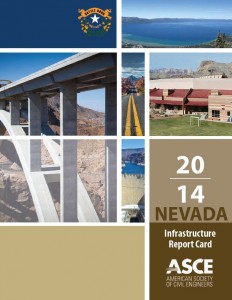 During the past twenty years Nevada experienced one of the largest growth surges in the country and then one of the worst downturns from late 2008 through 2013. This roller coaster economy decreased funding levels and preventive maintenance suffered leaving many infrastructure systems underfunded. Hardest hit may be school facilities in both rural communities and cities. Nevada’s funding for maintaining schools stagnated and left a funding shortfall of over $5 billion during the next 5 to 10 years.

The 2014 Report Card for Nevada’s Infrastructure, released today by the Nevada Section of the American Society of Civil Engineers (ASCE), gave the state’s infrastructure a grade of “C-.” The Report Card identifies more than 15 billion in needs across Nevada’s critical infrastructure sectors over 20 years, including:

“As the state’s economy continues to rebound, we must make investments in our infrastructure to match,” said Chuck Joseph, P.E., Chair of the Nevada Report Card. “Many of the grades in today’s report are lower than seven years ago. That’s unacceptable and it’s time to commit ourselves to addressing the needs of our roads, drinking water, dams and schools.”

“The condition of our infrastructure plays a huge role in making our state a great place to raise a family or own a business,” said Debra March, councilwoman, City of Henderson. “Our roads, schools and water pipes need attention and investment to keep our community thriving.”

“Our state’s aging infrastructure comes at a cost to Nevada’s families and businesses. As our economy rebounds, now is the time to invest in infrastructure to keep the momentum going,” said Jim Caviola, Neighborhood Economic Development Corporation.