Nearly a decade after it’s authorization expired, Congress may finally be getting around to reauthorizing the National Earthquake Hazards Reduction Program (NEHRP). The Senate made the first move last fall with the introduction by Senators Dianne Feinstein (D-CA) and Lisa Murkowski (R-AK) of the S.1768 – NEHRP Reauthorization Act. The bill would reauthorize the program to improve the nation’s earthquake preparedness. The bill was later discharged by the Senate Commerce Committee and could be brought to the Senate floor at any time. ASCE has endorsed this bill and is urging the House to draft similar legislation. 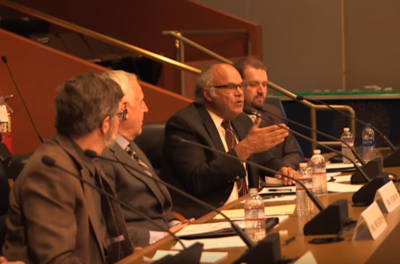 Yesterday, the House Science Committee held a field hearing in Huntington Beach, CA on the program and plans to introduce its own reauthorization bill in June. Testifying on behalf of ASCE was Chris Poland, P.E., S.E., NAE, M.ASCE, F.SEI, who has long been a proponent of NEHRP. In his opening statement, Poland noted that the lack of authorization has weakened the program’s overall effectiveness in the recent past and going forward. This comes at a time when the nation’s earthquake risk continues to grow due to population growth, urban development, and the deteriorating condition of the built environment. A second ASCE member participated in the hearing, Steve McCabe, Ph.D., P.E., M.ASCE, Director, National Earthquake Hazards Reduction Program; group leader, Earthquake Engineering Group, National Institutes of Standards and Technology (NIST).

First created in 1977, NEHRP coordinates federal research to understand and mitigate the impact of earthquakes and is made up of NIST, the Federal Emergency Management Agency, the U.S. Geological Survey, and the National Science Foundation, and can draw on the expertise of other federal and state agencies.  Through NEHRP, the federal government has engaged in seismic monitoring, mapping, research, testing, engineering, and related reference materials for building code development, mitigation, and emergency preparedness. NEHRP has served as the backbone for protecting U.S. citizens, their property and the national economy from the devastating effects of large earthquakes. Although NEHRP is well known for its research programs, it is also the source for hundreds of new technologies, maps, design techniques, and standards that are used by design professionals every day to mitigate risks and save lives, protect property, and reduce adverse economic impacts.

The program was last reauthorized between 2004 and 2009, when the program underwent the some of the most significant changes in its history with strong support and contributions from ASCE and others in the earthquake risk reduction and research communities. Since the authorization expired in October of 2009, ASCE members have testified at four hearings between 2011 and 2015. Over the years, reauthorization efforts have received no overt opposition but usually fell victim to unrelated partisan conflicts and a lack of strong Congressional leadership.

As drafted, S. 1768, would permanently reauthorize NEHRP, as opposed to the 5-year reauthorizations it received in the past. Other changes include:

ASCE, along with others in the earthquake community including, most prominently, the Earthquake Engineering Research Institute and the Seismological Society of America worked with Senators Feinstein and Murkowski in drafting the bill.

ASCE will continue to work on both sides of Capitol Hill to move this legislation forward. Add your voice to ours by contacting your Members of Congress to urge them to support to the reauthorization of the NEHRP program.