This week is National Engineers Week, which celebrate how engineers make a difference in our world. This is a guest post by David Engelstad, P.E, who works for the National Park Service. In the 2017 Infrastructure Report Card, parks received a grade of ‘D+.’

What better construction project can you be assigned to than one that connects you to our Nation’s first engineer, George Washington.  National Engineers Week is celebrated to coincide with George Washington’s birthday on February 22nd in honor of America’s first engineer, but he was also instrumental in a new transportation technology, the canal system, that provided much needed infrastructure for the development and growth of our new country.

The National Park Service, in honor of our Nation’s first engineer, is helping to archive America’s historic engineering records and to restore historic infrastructure to help tell the story of our Nation’s rich engineering past, which present day engineers can study and learn from.  The rehabilitation of the historic Conococheague Aqueduct is one project that connects this rich engineering past, telling the story of our Nation’s early transportation development from horse and cart on dirt roads, to canal barges towed by mules, to steam engines on railroad tracks, with each new transportation technology allowing larger quantities of commodities to be moved more efficiently. 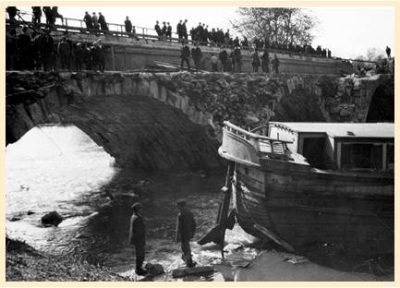 Along with his more known title – “father of our country,” George Washington is also considered to the “father of the Chesapeake & Ohio Canal.”   During his lifetime, Washington devoted much time and energy to the project of building a canal along the Potomac River.  During Washington’s first job as a surveyor of wilderness in Virginia, he realized the greatest obstacle to western expansion, farming, and development in the fertile Ohio Valley was poor internal travel.  A canal had never been attempted in American but he became convinced that a water route was possible.  In 1784, just after the Revolutionary War, Washington resumed his efforts to promote a canal to be built around the Potomac’s worst obstacles, thus the start of the Potowmack Canal Company, which later in 1820 was transferred to the Chesapeake and Ohio Company. 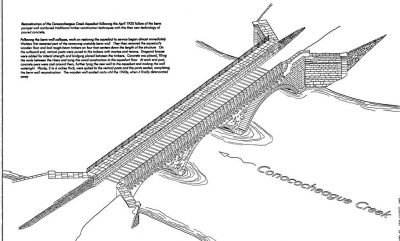 Situated midway in the nearly 185-mile historic Chesapeake & Ohio Canal, the Conococheague Aqueduct is the second largest of the 11 aqueducts built in the canal system.  Built in 1835, and withstanding mortar bombing during the Civil War, the masonry Conococheague Aqueduct channel wall collapsed duringa cargo barge impact in 1920, causing major failure of the masonry spandrel and parapet walls, with the barge falling 20 feet to Concocheague Creek below.  It was repaired hastily with timber outriggers structure/planking to allow the aqueduct to be placed back in operation in March 1920.  The canal company went bankrupt in 1924 due to competition with the newly built railroad system, a newer technology that became the favored mode of transportation of the day.

The NPS Conococheague Aqueduct Rehabilitation Project will perform specialized engineering work that preserves the historic character while meeting modern building performance goals.  This project completion date 2019, will again allow boats to cross over the Conococheague Creek via a watered aqueduct, providing visitors and budding engineers a unique experience of being able to enjoy an interpretive boat tour bridging the present to the historic past.