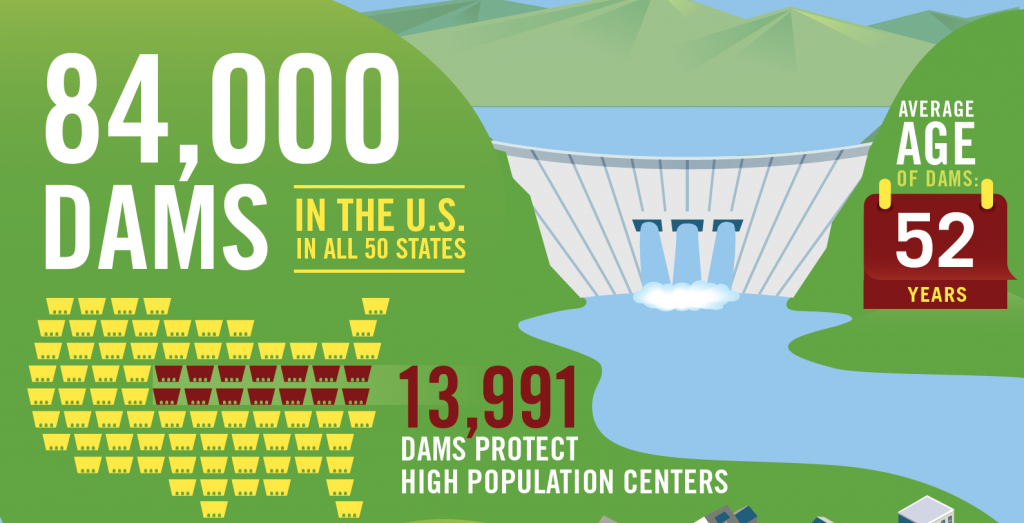 Today, May 31, is National Dam Safety Awareness Day. The day commemorates when the South Fork Dam failed on May 31, 1889, sending a deadly rush of water and debris into the city of Johnstown, Pennsylvania.  Commonly known as the Johnstown Flood, the disaster destroyed much of the city and took the lives of more than 2,200 people. Caused by human error and indifference, it is one of the worst human tragedies experienced in U.S. history. National Dam Safety Awareness Day is also an opportunity to better educate elected leaders and the public about the importance of dam safety, including having Emergency Action plans for high-hazard dams.

The upcoming anniversary of another landmark and tragic dam failure echoes the need to learn lessons from history. On June 5, 1976, Teton Dam in Idaho broke, inundating over 300 square miles and killing 11 people. The flood resulted in hundreds of millions of dollars in property damage, as well as extensive environmental damages.

Faulty decision making played a leading role in these catastrophes, both of which could have been prevented with better planning, more communication, and more humility. The good news is lessons learned from Johnstown and Teton have been applied to the establishment and improvement of dam safety programs at federal and state agencies throughout the U.S. Yet lack of dam owner vigilance and awareness continues. Over 65 percent of known dams in the U.S. are owned privately. Many dams determined to be deficient (there are over 4,000 in the U.S.) are not getting the upgrades needed to improve public safety. Many times this is due to a lack of funding and understanding of the risk.

Lack of awareness also contributes enormously to a danger posed by dams: including the hydraulic currents around them. This year, National Dam Safety Awareness Day will focus on encouraging swimmers and boaters to remain safe around dams.

Last year, at least 25 people drowned at dam sites across the U.S., and the trend is continuing this year, with at least 12 deaths reported in Alabama, Colorado, Iowa, Kansas, Kentucky, Tennessee, Texas, Virginia, and Wisconsin.

Several federal agencies and 49 states have statutes creating dam safety programs.  Alabama is the only state without a dam safety program. These programs all share a common goal of safety of dams; striving to reduce the risk of catastrophic dam failures such as the Johnstown and Teton failures.  No such nationwide initiative exists, however, to address the topic of recreational safety at dams; only a few states have directly confronted the issue.

Another challenge facing the nation’s aging dams is inadequate funding. The proposed Senate WRDA legislation has an opportunity to address that through a new dam rehabilitation funding assistance program. The program would authorize grants to go toward dam rehab. It will help dam owners who lack funding to rehabilitate, repair, or remove a high hazard potential dams, which are at risk of failure.