Rail infrastructure received the highest grade of a B, citing significant investment in technology that improves crossing safety and cut the volume of incidents in half over the last 20 years. Ohio has the fourth largest number of public rail/highway grade crossings in the country (5,737) and the state spends about $15 million annually at public crossings to reduce crashes.

“Infrastructure plays a vital role in the lives of Ohio’s residents and tourists, and supports commerce for local businesses and freight,” said U.S. Rep. Troy Balderson, who serves on the House Transportation and Infrastructure Committee. “Ohio’s roadways and bridges carry the third-highest freight volume in the U.S. and accommodate the sixth-most vehicle miles travelled, making our state an essential tool in the national economy.” 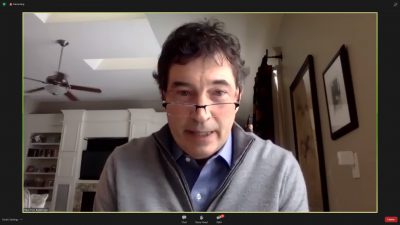 Rep. Troy Balderson on the importance of infrastructure investment.

Innovation and data-based decision-making were key themes in the report. For example, many Ohio water systems are now implementing advanced metering systems that capture individual usage and allows both system managers and customers to access data and make better water usage decisions. This is an important step since aging water distribution networks are expected to cause a 36% increase in pipeline breaks over the next 20 years. Ohio’s energy utilities are also making major investments. Using smart grid telemetry, many utilities can now locate outages in an automated way – a tool that improves safety for utility personnel during and after storms and removes the responsibility for ratepayers to report outages. Innovative practices such as these are important for addressing aging systems.

Levees, roads and transit all received the lowest grade of ‘D.’ Ohio’s levees protect 151,000 residents and $27.5 billion in property, yet 54% of those residents are living behind a levee which has not been screened. The average age of Ohio’s levees is 47 years, nearing their projected design life of 50 years.

The report notes the extensive and long-term lack of transit funding that decreased from $42.3 million in 2000 to $6.6 million in 2018. In 2019, the passage of H.B. 62 was intended to increase state funding for transit to $70 million in 2020 and 2021. Due to COVID-19, those funds have already been reduced to $66.8 million and $56 million. Similarly, the 2019 transportation budget increased the motor fuel tax and vehicle registration fees, but with fewer people driving due to COVID-19, motor fuel tax revenues have fallen short of original projections.

The report also includes calls to action to raise the grades, such as:

“For years, America’s infrastructure was the envy of the world. But for too long now, we’ve failed to invest the necessary resources in our nation’s roads, bridges, schools and technology. I’m committed to working with President Biden and my colleagues in Congress to invest in our state’s infrastructure needs, create jobs for American workers and get our nation moving again,” said U.S. Sen. Sherrod Brown, Chairman, Senate Committee on Banking, Housing and Urban Affairs.