Chime in on Wednesday to Fix the Trust Fund

As Congress continues the debate on the best way to #FixTheTrustFund and modernize America’s roads, bridges, and transit, USDOT Sec. Foxx and Transportation & Infrastructure Chairman Bill Shuster are heading to Twitter for a bipartisan “townhall” to discuss surface transportation. The town hall, a first of its kind, will be Wednesday, Feb. 11 after Sec. Foxx concludes his testimony in from of the U.S. House of Representatives’ Transportation & Infrastructure Committee, around 12 p.m. ET. 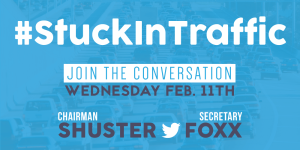 Now it’s up to you to ask your questions about transportation investment and voice your support for a long-term funding solution. To get the conversation rolling, here are some key facts from the 2013 Report Card for America’s Infrastructure that would make great tweeting material. To join in the conversation, use #StuckInTraffic anytime between now and Wednesday.

No matter what you contribute, the important thing is that they know people are listening and expecting them to come up with real solutions to fix the Highway Trust Fund. Mark your calendar to join in for this historic event!