To successfully save America’s infrastructure, the U.S. needs strong leaders dedicated to investing in our roads, bridges, water pipes, levees and other infrastructure. Two such lawmakers who exhibit bold leadership and resolve to improve our nation’s infrastructure are Sen. Barbara Boxer (D-CA) and Congressman Bill Shuster (R-PA).

In recognition of both lawmakers’ efforts to prioritize infrastructure, the American Society of Civil Engineers inducted Sen. Boxer and Rep. Shuster as Honorary Fellows. A rare distinction, only 38 individuals have been bestowed this honor, including these most recent inductees.

Sen. Boxer distinguished herself as a champion for infrastructure over the course of her more than 30 years of public service, which includes 24 in the U.S. Senate. As Chairwoman of the Environment and Public Works Committee, she led the effort to enact the Water Resources Reform and Development Act (WRRDA) and the Moving Ahead for Progress in the 21st Century Act (MAP-21). 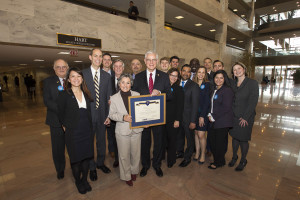 Sen. Boxer with ASCE members after receiving her award. (David Hathcox for ASCE) 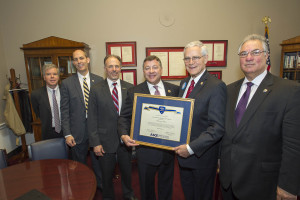 Similarly, Rep. Bill Shuster earned this recognition for his efforts as an eight-term member of the House of Representatives. As Chairman of the Transportation & Infrastructure Committee, he helped shepherd the passage of MAP-21 and steered the effort to enact WRRDA.

Both honorees were recognized by ASCE last week during the 15th annual Legislative Fly-In.

Both Congressman Shuster and Sen. Boxer exemplify the type of leadership we need to successfully improve our nation’s “D+” infrastructure. Thanks to their leadership and vision, Congress has started to address the backlog of investment needs. Both lawmakers will continue to play an important role in future infrastructure legislation, starting with the need to find a long-term, sustainable solution to fix the Highway Trust Fund.

Prev Story: It's Time Again to GROW America Next Story: Transportation Knows Neither Red Nor Blue