ASCE Members Meet With US Lawmakers

“Let’s win this for our country,” proclaimed ASCE President Robert D. Stevens, PhD, PE to a room of nearly 200 ASCE members who descended on the nation’s capital to encourage members of Congress to fix the Highway Trust Fund last week.

The group visited Washington, D.C. as part of the 15th annual ASCE Legislative Fly-In, which offers the opportunity for ASCE members to engage with their elected representatives and senators about the policy issues that impact civil engineers.

The two-day event included briefings on federal legislative issues, including the Water Resources Reform and Development Act (WRRDA) appropriation process and the need for Congress to pass a long-term transportation bill this year. To further the conversation on transportation, attendees were addressed by the U.S. Department of Transportation Under Secretary for Policy, Peter Rogoff on Tuesday evening and Congressman Earl Blumenauer (D-OR) on Wednesday morning. 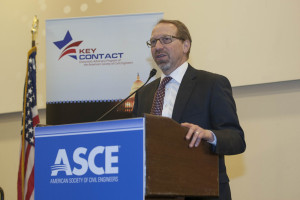 Rogoff thanked the group for making the journey to Washington to highlight this important issue, remarking “No one is closer to infrastructure than you and your colleagues.” He then outlined the reasons America needs a bolder plan for the future to meet the demands of a growing population. Despite the major maintenance needs in addition to needs to account for future growth, the transportation network is, as Rogoff put it, “starved for funds.”

Rogoff warned that with 32 short-term extensions, local and state leaders tend to stop planning long-term projects, which can take many years of planning and building.

“When you have 32 short term extensions people lose their vision. Why would you plan a project…if you don’t know the federal government will pay its bills eight months hence?” he asked rhetorically.

This is why it is so important to fix the Highway Trust Fund in a way that increases funding: so that we can move beyond the status-quo, and start shaping the future of our transportation network. For example, Rogoff pointed to the Administration’s GROW AMERICA Act, which increases funding for public transit to ensure it can be upgraded to meeting growing demand.

The administration is pushing hard for an increase in investment, because they believe that given the political challenges facing this legislation at the end of it there should at least be positives to show for it.

“It is no victory to maintain current levels of spending,” said Rogoff.

Ultimately, Rogoff had cautious optimism that there could be a multi-year bill passed this year.

“Mayors and governors are starting to sound off this is no way to run this program. You can say it with even more credibility,” he concluded.

Congressman Blumenauer (D-OR) shared an equally compelling message. The $3.6 trillion investment need estimated by ASCE is “within our capacity and … will repay for itself” he said, adding that it would bring down the deficit in the long term.

Blumenauer highlighted many benefits that would result from increasing investment in transportation, including reducing time wasted sitting in traffic, enhancing quality of life for every family, and creating jobs in a range of opportunities. The Congressman earlier this year proposed the UPDATE Act, HR 680, which would raise the rate of the gas tax by five cents for the next three years then tie it to inflation to address the funding deficit in the Highway Trust Fund. When he introduced the bill, he had 20 co-sponsors and endorsements from many organizations, including ASCE.

He acknowledged that many of his colleagues are wary of repercussions from voting for a tax increase. To help them find the political courage, Blumenauer told the Fly-In attendees to reassure them that there is sufficient political cover.

“Ninety-eight percent of the legislators that voted to increase the gas tax [on the state level] got re-elected in 2014. Make it clear that what ends the career is allowing the country to fall apart if they can’t meet the needs of your community,” said Blumenauer.

As further evidence of the historically bipartisan nature of infrastructure investment, Blumenuaer recounted when President Reagan called on Congress to more than double the gas tax in his 1982 Thanksgiving address. Congress responded by doing so when they returned to Washington after the holiday.

In conclusion, Blumenauer shared that he counts on ASCE for continued support on this issue and to help get a bill passed: “I hope we’ll be at a signing ceremony in the future for a six-year re-authorization.” 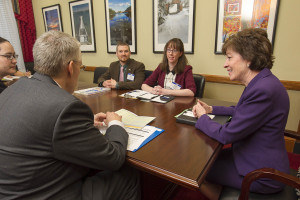 The 200 ASCE members in attendance then headed to Capitol Hill to meet with members of Congress and their staffs of 46 states and the District of Columbia.

Following the meetings, the group reconvened at a reception in the U.S. Capitol Cannon Caucus Room featuring a Dream Big!: Engineering Wonders of the World theme in anticipation of the ASCE-sponsored IMAX film coming out next year. ASCE members and Congressional staffers were able to continue their conversations from the afternoon while networking and having some fun taking photos in front of a green screen photo booth, which then transformed the background into iconic infrastructure backdrops.

During the proceedings, Sen. Barbara Boxer (D-CA) and Rep. Bill Shuster (R-PA) were both presented with awards naming them Honorary Fellows of the Society.

Sen. Boxer was selected in honor of her more than 30 years of public service, which includes 24 in the U.S. Senate. As Chairwoman of the Environmental and Public Works Committee, she led the effort to enact the Water Resources Reform and Development Act (WRRDA) and the Moving Ahead for Progress in the 21st Century Act (MAP-21).

Rep. Bill Shuster earned ASCE’s recognition for his efforts as an eight-term member of the House of Representatives. As Chairman of the Transportation & Infrastructure Committee, he helped shepherd the passage of MAP-21 and steered the effort to enact WRRDA.

Including last week’s inductees, there have only been 38 Honorary Fellows named by the Society.

Also recognized during the Fly-In were the winners of the inaugural Outstanding Civil Engineer Advocate of the Year awards, recognizing an individual and group who went above and beyond in advocating for ASCE’s issues in the past year. This year’s winners were Darren Benoit of New Hampshire and the Louisiana Section.

The two days encapsulated the resolve the American Society of Civil Engineers has to encourage Congress to fix the Highway Trust Fund with a long-term, sustainable solution. To contribute in this effort, sign up to be a Key Contact today.