A Big WIIN For Water Resources

Shortly after 1:30 a.m. on Saturday, Dec. 10, the U.S. Senate passed the Water Infrastructure Improvements for the Nation (WIIN) Act, which included a Water Resources Development Act (WRDA) title by a vote of 78-21. The vote was one of the final acts of the 114th Congress. The House passed the same bill a few days earlier by a vote of 360-61.President Obama is expected to sign the bill in the next few days.

This bill had been months—and in some ways years—in the making. Since the beginning 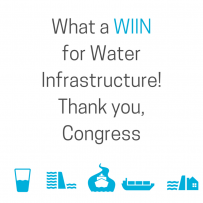 of this year, ASCE has been actively working on getting a water resources bill passed, and restoring it to a two-year cycle. In February, ASCE provided Congressional testimony before both the Senate and House on the importance of passing a new water resources bill. The final bill includes several of our priorities, including the creation of a High Hazard Dam Rehabilitation program and other important infrastructure programs, including authorization of 30 new projects for the U.S. Army Corps of Engineers. ASCE members sent nearly 5,000 emails to Capitol Hill urging passage during the final days of debate on the bill.

Those final few days before the bill’s passage were fraught with consternation as a provision inserted last minute to assist with drought relief to western states rattled environmentalists and the bill’s primary Democratic author, California Senator Barbara Boxer, who worried that water transfers could affect the health of fishery populations. Those concerns did peel off nearly two dozen democratic votes in the Senate, however, the bill ultimately passed with strong bipartisan support.

While Congress has vowed to pass a water resources bill every two years (the last one passed in 2014, but before that 2007) the authorization components of the bill still must be funded through annual appropriations. The 114th Congress concluded by passing a continuing resolution (CR) to keep the government open and running through April 2017. This sort of stopgap funding measure is not the type of major injections of infrastructure investment necessary to reduce the estimated $1.6 trillion infrastructure funding gap that is expected by 2020.  We are hopeful that the 115th Congress will work diligently to fund infrastructure programs and increase federal appropriations to important programs.

In the meantime, thank your Members of Congress who voted for WIIN by sending an email.