On Wednesday, November 16th, the Tennessee section of the American Society of Civil Engineers released the 2022 Report Card for Tennessee’s Infrastructure in Nashville. The report covered 13 categories of infrastructure, and overall, Tennessee earned a grade of “C”, the same grade as the Tennessee 2016 Report Card. A grade of “C” means Tennessee’s infrastructure is in mediocre condition and requires attention, but is a step ahead of the national average of “C-“ given in the 2021 Report Card for America’s Infrastructure. Civil engineers graded aviation (C+), bridges (B), dams (D+), drinking water (C+), energy (C+), inland waterways (C), parks (C+), rail (C), roads (C), solid waste (C+), stormwater (C+), transit (D+), and wastewater (C-). 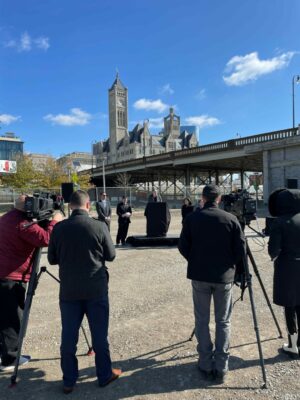 The report card release comes after a team of volunteer civil engineers spent hundreds of hours analyzing information about the infrastructure conditions across the state and what kind of funding is needed to improve the quality of the state’s infrastructure systems.

Much of the report focused on the impact of Tennessee’s rapidly growing population. Engineers found that infrastructure systems in the state are doing their part to keep residents safe and the economy moving. However, Tennessee’s surging population threatens the long-term viability of these networks. For example, drivers in the Nashville area spend approximately 33 hours a year stuck in traffic, and without investment in new roads and bridges, that number will go up as the population grows.

The report card also found that Tennessee has seen some infrastructure successes over the last few years in areas like wastewater and energy. However, more data is needed on infrastructure systems across the state to evaluate their conditions more accurately.

Finally, the report highlighted the important role Tennessee’s infrastructure plays in the regional and national economy transporting goods across the country. This includes airports, rail, and inland waterways. More funds are needed to ensure these systems can keep up with growing demand.

The Tennessee report card release comes a little more than a year since the Bipartisan Infrastructure Act became law.  While the law will provide the biggest infrastructure investment in Tennessee in decades, it will only cover a fraction of what is needed.

Tennessee’s section of ASCE will now present the findings from their report to lawmakers and leaders across the state to promote smart investments in infrastructure across the state.

You can find more information and the full report at https://infrastructurereportcard.org/tennessee